Ignatius was the bishop of Antioch in Syria at the beginning of the second century A.D. and an early Christian martyr. Near the end of the reign of the Roman emperor Trajan (98–117), Ignatius was arrested, taken in chains to Rome, and eventually thrown to the wild beasts in the arena.   END_OF_DOCUMENT_TOKEN_TO_BE_REPLACED

Today the church remembers Cyprian of Carthage, an early bishop in the church in North Africa. Cyprian, born ca. 200, lived through the persecutions of the Roman Emperor, Decius, and was instrumental in guiding the church through one of the most pressing problems to come out of the early persecutions…. 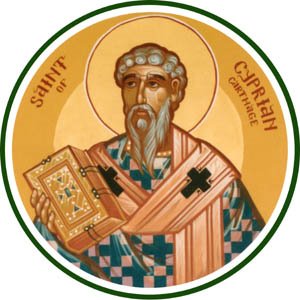 Today the church remembers Cyprian of Carthage, an early bishop in the church in North Africa.  Cyprian, born ca. 200, lived through the persecutions of the Roman Emperor, Decius, and was instrumental in guiding the church through one of the most pressing problems to come out of the early persecutions  — what do with those Christians and clergy who renounced the faith under these persecutions, but now wanted to return to the faith once the terror of the persecutions ceased.   During the midst of these persecutions, a terrible plague ravaged the Roman empire, taking the lives of thousands a day.  Christians like Cyprian ministered to the sick and dying in spite of the persecutions.  Cyprian was exiled from Carthage in 257 by the local ruler for an epistle he wrote in defense of Christianity.  He returned to Carthage after the death of that ruler, only to be condemned by his successor toe death.  He was beheaded in AD 258.     Foxe’s Book of Martyrs provides this short biography of Cyprian:

“Cyprian, bishop of Carthage, an eminent prelate, and a pious ornament of the Church. The brightness of his genius was tempered by the solidity of his judgment; and with all the accomplishments of the gentleman, he blended the virtues of a Christian. His doctrines were orthodox and pure; his language easy and elegant; and his manners graceful and winning: in fine, he was both the pious and polite preacher. In his youth he was educated in the principles of Gentilism, and having a considerable fortune, he lived in the very extravagance of splendor, and all the dignity of pomp.

About the year 246, Coecilius, a Christian minister of Carthage, became the happy instrument of Cyprian’s conversion: on which account, and for the great love that he always afterward bore for the author of his conversion, he was termed Coecilius Cyprian. Previous to his baptism, he studied the Scriptures with care and being struck with the beauties of the truths they contained, he determined to practise the virtues therein recommended. Subsequent to his baptism, he sold his estate, distributed the money among the poor, dressed himself in plain attire, and commenced a life of austerity. He was soon after made a presbyter; and, being greatly admired for his virtues and works, on the death of Donatus, in A.D. 248, he was almost unanimously elected bishop of Carthage.

Cyprian’s care not only extended over Carthage, but to Numidia and Mauritania. In all his transactions he took great care to ask the advice of his clergy, knowing that unanimity alone could be of service to the Church, this being one of his maxims, “That the bishop was in the church, and the church in the bishop; so that unity can only be preserved by a close connexion between the pastor and his flock.”

In A.D. 250, Cyprian was publicly proscribed by the emperor Decius, under the appellation of Coecilius Cyprian, bishop of the Christians; and the universal cry of the pagans was, “Cyprian to the lions, Cyprian to the beasts.” The bishop, however, withdrew from the rage of the populace, and his effects were immediately confiscated. During his retirement, he wrote thirty pious and elegant letters to his flock; but several schisms that then crept into the Church, gave him great uneasiness. The rigor of the persecution abating, he returned to Carthage, and did everything in his power to expunge erroneous opinions. A terrible plague breaking out in Carthage, it was as usual, laid to the charge of the Christians; and the magistrates began to persecute accordingly, which occasioned an epistle from them to Cyprian, in answer to which he vindicates the cause of Christianity. A.D. 257, Cyprian was brought before the proconsul Aspasius Paturnus, who exiled him to a little city on the Lybian sea. On the death of this proconsul, he returned to Carthage, but was soon after seized, and carried before the new governor, who condemned him to be beheaded; which sentence was executed on the fourteenth of September, A.D. 258.”  Foxe’s Book of Martyrs, ed. William Byron Forbush, www.ccel.org.