Noah, the son of Lamech (Gen 5:30), was instructed by God to build an ark, in which his family would find security from the destructive waters of a devastating flood that God warned would come. Noah built the ark, and the rains descended. The entire earth was flooded destroying “every living thing that was on the face of the ground, both man and beast” (7:23). After the flood waters subsided, the ark came to rest on the mountains of Ararat. When Noah determined it was safe, and God confirmed it, he and his family and all the animals disembarked. Then Noah built an altar and offered a sacrifice of thanksgiving to God for having saved his family from destruction. A rainbow in the sky was declared by God to be a sign of His promise that never again would a similar flood destroy the entire earth (8;20). Noah is remembered and honored for his obedience, believing that God would do what He said He would.   From LCMS Commemoration Biographies, Noah.

It is fitting that Noah is remembered in the first week of Advent.  John the Baptizer prepared the way for our Lord and was the voice crying in the wilderness.  It was Noah, however, and the eight (8) people in his boat that foreshadowed our baptism, and the baptism of Christ.  It is tied to the covenant with Abraham marked by circumcision.  All male children were circumcised on the eighth (8th) day of they are lives.  Christ, the firstborn to Mary and Joseph was presented at the Temple on the eighth (8th) day of His earthly life.  Baptism now circumcises our hearts and marks us as ones redeemed by the precious body and blood of our Lord and Savior, Jesus Christ.  Baptismal fonts in the early church, and in many churches today have eight (8) sides to them, tying this sacrament all the way back to Noah and the flood.

Posted in Commemoration of Saints and Church Figures, The Church Year, Uncategorized

This week our children will continue with the Old Testament story of Isaac and Rebecca.  God continues to work out His plan of salvation in the story of these two persons.  We find that Abraham sends his servant to his own people, far away to find a wife for his son, Isaac.   “LORD,” when used in uppercase, refers to the personal name of God.  It is used many, many times in this story, and holds a central place for Abraham and his people in their daily lives and in their worship.   This is not just another arranged marriage.

Click here to listen to the Issues, Etc. weekly interview with Deaconess Pam Nielson for insight into this week’s lesson.

God promised Sarah and Abraham a son, a real son of their own.  Sarah was old and barren, yet God provided.  Isaac was the son born to Abraham and Sarah in their old age. This week, God asks something of Abraham.  A sacrifice.  As they walk up the mountain, Isaac asks his father where the sacrifice may be.  Abraham replies in faith, “God will provide.”  Click here to listen to this week’s interview with Deaconess Pam Nielson of Concordia Publishing House on Issues, etc. 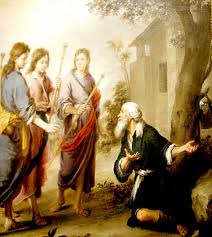 This week, Abraham receives three heavenly visitors who tell him that Sarah will have a child.  Sarah laughs, but learns that God’s covenants and promises are no laughing matter.  Click here to listen to the Issues Etc. interview with Deaconess Pam Nielson of Concordia Publishing House discuss preparing this lesson for Sunday.